Anubis Rex is a two part level in Pac-Man World. It is the seventh level in the game, and the last stage in the Ruins Area, out of three. (Which is unique, because all other areas have four levels, although this may be made up for with the two part in Anubis Rex.) The first part of the level is a long stretch in a temple with a hand of a mummy chasing Pac-Man through the whole level. This would be simple, but there are holes in the floor that shoot arrows out of them. The only other hazard in this level is a gate that smashes up and down. After getting through the second opening door, the second part of the level begins. In this part, Pac-Man is teleported to an area surrounded by lava. In the center, there is a huge temple/statue with it's hands closed together, and a colored diamond on its head. On each side, there are two Rev Platforms. Pac-Man needs to Rev Roll on all four of these in order for the temple to move his hands to open the path to his heart. Pac-Man then must Rev Roll into this in order for the temple to take damage. This would be easy if there wasn't any hazards. This boss is considered by many fans the most difficult boss in the Pac-Man World series, alongside King Galaxian and Clyde In The Caldera.

This stage adds another hazard every time Pac-Man hits the temple's heart. When the temple's diamond is yellow, (first time) there will be fireballs flying between the four Rev Platforms that can intercept Pac-Man when he is jumping from one place to another. When his diamond turns green, (second time) the temple sends black tornadoes out to follow Pac-Man, and pick him up. When the diamond turns pink, (third time) fireballs start to land on the Rev Platforms, and in the center, right in front of the temple. When the diamond turns blue, (final time) the temple shoots beams of energy out of the blue diamond, either from left to right, or right to left. With all of these things happening at the same time, the fight can get quite difficult.

The Anubis Rex's face can also not be touched at any point; should Pac-Man jump onto his hands and come into contact with his face, he will instantly die, regardless of how much health he has. 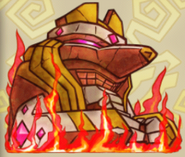