Baby Pac-Man is an arcade game released by Bally Midway in 1982. The game combines both standard Pac-Man gameplay and pinball.

Upon starting the game, the player will be greeted with a basic-looking Pac-Man maze, lacking Power Pellets and with two empty paths at the bottom. The Pac-Man portion is relentlessly difficult compared to the original game(s), as the Ghost A.I. is much more aggressive. If all three lives are lost in this mode, the game is over.

When you enter one of the aforementioned bottom paths, however, the pinball table (located below the screen) spawns a ball, and the player controls this part until the ball is lost; no lives are lost in this process, but the pathways are now closed, and the player is forced to continue the Pac-Man portion. The only way to access the pinball again is to either lose a life or finish the maze.

Within the pinball mode, it is possible to earn various bonuses by highlighting portions of the playfield. If the player can successfully light up these words, a "prize" appears in the video portion:

A cutscene occasionally appears as Baby Pac-Man goes down one of the bottom chutes, showing him ride a "Pacsculator" to the pinball field.

Due to the pinball portion being hard to replicate on home consoles, and the many current issues regarding Bally Midway copyrights, no official ports of Baby Pac-Man have ever been released. There are, however, PC emulators that can run the game (very difficult to set up; the all-in-one "Baby Pac-Man Installer" is recommended for ease of use).

A homebrew Atari 7800 version was developed in 2019, which solely works on a video screen. It later received an AtariAge cartridge release as well. 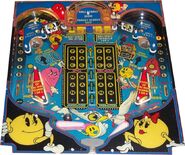 Close-up of the pinball playfield. 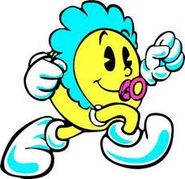 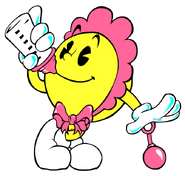 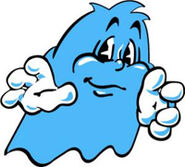