In the Hanna-Barbera cartoon, Chomp-Chomp was an adorable housepet. Another Pac-Family pet, Sour Puss, often tried to attack him, but all of his plans backfired, and Chomp-Chomp never noticed that Sour Puss was even after him.


Chomp-Chomp appeared in the cancelled Pac-Man & Chomp-Chomp, a localization hack of Pac & Pal. He has the same functions as Miru.


Exclusively in the American version of Pac-Land, Chomp-Chomp appears only as a cameo alongside Sour Puss when you arrive at Pac-Man's House.


In Pac 'n Roll, Chomp-Chomp made an appearance as a puppy. He, with Pac-Master's family, was banished by the evil ghost Golvis. He is later rescued by Pac-Man.


In Pac-Man 2: The New Adventures, Chomp-Chomp is seen sleeping in his dog house. He wakes up whenever Pac-Man walks by and follows him. The player can choose to have Pac-Man pet Chomp-Chomp, and it will make both characters happier.

The Alternate is that if The Player chooses to shoot a rock at Chomp-Chomp, it will make him mad and he'll start barking at Pac-Man which would cause Pac-Man to Yell at him and Chomp-Chomp will walk sadly back to his Doghouse, Sometimes this happens when Pac-Man is already in a bad mood.

As with the rest of Pac-Man's family, Chomp-Chomp is captured by Toc-Man. Pac-Man later saves him. Chomp-Chomp is the second friend to be freed, found towards the end of the Ruins level Manic Mines.


Chomp-Chomp has a brief cameo in Pac-Man World 2, sleeping next to Pac-Man in the opening cutscene. He also appears in the ending sequence, where he chases away the Ghost Gang down a hill.


Chomp-Chomp is the first of eight Pac-Land residents kidnapped by the Ghost Gang in Pac-Man Pinball Advance, and must be rescued by Pac-Man.

After a long absence from the series, Chomp-Chomp appeared in Pac-Man Pop!. He has been captured, and must be rescued by Pac-Man. It is unknown if he's really Chomp-Chomp, since there are many of him.

Chomp-Chomp is a dog with a round, Pac-Man-like body, with blue fur and a brown snout. Some later games change his fur color to white or yellow, and sometimes add an orange spot over his right eye. In Pac-Man World, he is proportioned more like a real-world dog; this is reverted back to the original, rounded look from Pac-Man World 2 onwards. 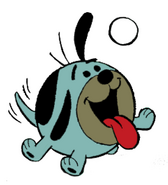 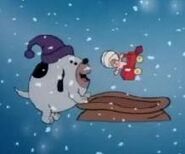 Pac-Man World (furthest to the right) 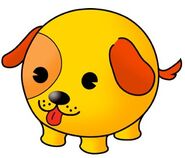 Pac-Man Pop!
Add a photo to this gallery
[v · e · ?]
Retrieved from "https://pacman.fandom.com/wiki/Chomp-Chomp?oldid=29503"
Community content is available under CC-BY-SA unless otherwise noted.