For more information on this character, see [[Pookapedia - Taizo Hori]].

Taizo Hori (ホリタイゾウ Hori Taizō), more commonly known under the alias Dig Dug (ディグダグ Digu Dagu), is the main character of the Dig Dug series; he has had several minor appearances in the Pac-Man series. He is enemies with Pooka and Fygar, and is the father of Mr. Driller.


Dig Dug is one of the racers in Pac-Man Kart Rally. He is unlocked by default.


Dig Dug, Pooka, and Fygar are unlockable characters. They appear alongside Pac-Man and the Ghost Gang.


Dig Dug, along with Pooka and Fygar, make a cameo in Wreck-It Ralph at Game Central Station.

Dig Dug was originally going to be the homeless character in the movie. Namco did not want him in this role, due to him having a wife (Baraduke) and son (Mr. Driller); as such, the role was given to Q*bert instead. 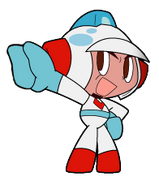 Namco All Stars: Pac-Man & Dig Dug
Add a photo to this gallery
[v · e · ?]
Retrieved from "https://pacman.fandom.com/wiki/Dig_Dug?oldid=26144"
Community content is available under CC-BY-SA unless otherwise noted.