Dr. Buttocks is the Netherworld's greatest evil scientist with an ego rivaling that of Betrayus, and is Butt-ler's twin brother. He specializes in inventing evil gadgets with his superior intellect, which he never passes up an opportunity to brag about. He is one of the main villains in Pac-Man and the Ghostly Adventures. He hates his twin brother, Butt-ler (and the feeling is mutual). He finds out the Ghost Gang are working with Pac-Man, but he has yet to gather enough evidence to prove it to Betrayus. He is voiced by Brian Drummond (who also plays Clyde and Butt-ler) with a hint of a French or German accent. Which is odd considering Butt-ler has a British accent however the accent difference could be part of a desire to distance himself from his brother.

His ego and arrogance is eclipsed only by Betrayus. Buttocks wears a mechanical claw on one arm. He has a petty rivalry with Sir Cumference whose inventions he often tries to steal. For all his genuine brilliance his inventions nearly always fail. 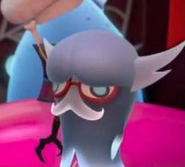 Dr. Buttocks
Add a photo to this gallery

This article is a stub. You can help this wiki by repairing or expanding it.

Retrieved from "https://pacman.fandom.com/wiki/Dr._Buttocks?oldid=29349"
Community content is available under CC-BY-SA unless otherwise noted.