Erwin is the primary antagonist in Pac-Man World 3. He is a short, gray, megalomaniacal humanoid with a desire for destruction.


In the game, he used a Spectral Syphon of his own design to suck in energy to destroy Pac-Land which is hundreds of miles away. After Pac-Man destroyed one of his death machines, Erwin was defeated by getting sucked into his own Spectral Syphon. Pac-Man told him, "Always keep your feet on the ground, Erwin". The last thing he said to Pac-Man was, "I always... hated... yellow", and the last thing he ever said was, "MOTHERRRR!!!".

While it seems likely that he might have perished in the explosion, Erwin's true fate has never been expressly stated in any form (Although his appearance in Pac-Man Rally may state that he survived the blast). Not to mention the fact that villains from previous games are always never shown to have ever died following their final defeat. Generally getting themselves imprisoned, seriously roughed up, or banished.


Erwin was later featured as a playable character in Pac-Man World Rally. However, the canonicity of this game is debatable.

Erwin is a short, grey-skinned man with a big head and yellow eyes. He resembles the "Grey" alien variant commonly used in science fictions stories and accounts. He wears a cyan-colored hazmat suit, and purple colored gloves and boots. Radiation symbols have been stamped onto his suit, due to the radioactive nature of his experiments. What little hair he has on the back of his head is thin, black and triangular. He is likely not a native of Pac-Man's home planet.

His squeaky voice and whiny attitude perhaps confirms this, it is likely that Erwin's mean spirited and bigoted nature is a result of an inferiority complex, due to his small stature. 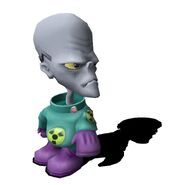 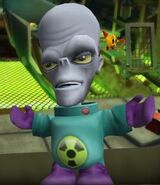 Pac-Man World Rally
Add a photo to this gallery
[v · e · ?]
Retrieved from "https://pacman.fandom.com/wiki/Erwin?oldid=27766"
Community content is available under CC-BY-SA unless otherwise noted.