Betrayus (before),
Sir Cumference (as pet)

Pac-Man and the Ghostly Adventures (2013)

Fuzbitz is Sir Cumference's pet monster. He used to live in the Netherworld but left when Lord Betrayus rejected him. He later saved Pacster from falling off a building. When Pac heard from Clyde that Fuzbitz was an orphan, he decided to take him in, but since no pets were allowed in the dorm, he was later given to Sir Cumference. Fuzbitz speaks monster and can use his ears like hands. When Fuzbitz gets angry, he turns into a more threatening-looking monster. 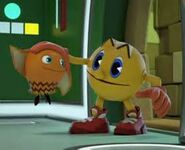 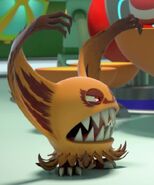 Fuzbitz's monster form
Add a photo to this gallery
[v · e · ?]
Retrieved from "https://pacman.fandom.com/wiki/Fuzbitz?oldid=26670"
Community content is available under CC-BY-SA unless otherwise noted.