Fygars (ファイガ Faiga) are an antagonistic species from the Dig Dug series of games. They have made several appearances in the Pac-Man series. They are good friends with Pookas, and mortal enemies of Dig Dug.


Fygar is an unlockable character in Pac-Man World Rally. He is unlocked by beating the Rally Cup on Hard difficulty; in the PSP version, he is available by default. Fygar gains the ability to shoot fire once it eats a Power Pellet.


Fygar, Pooka, and Dig Dug are unlockable characters. They appear alongside Pac-Man and the Ghost Gang.


Fygar, along with Pooka and Dig Dug, make a cameo in Wreck-It Ralph at Game Central Station.


In the movie Pixels, numerous aliens took the form of Fygars when the city was under a massive attack. 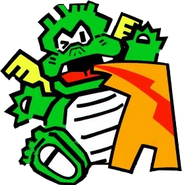 Pac-Man World Rally
Add a photo to this gallery
[v · e · ?]
Retrieved from "https://pacman.fandom.com/wiki/Fygar?oldid=26133"
Community content is available under CC-BY-SA unless otherwise noted.