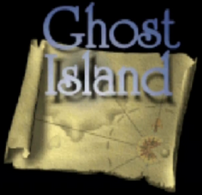 Ghost Island (ゴーストアイランドGōsuto Airando) is the home of the Ghosts in Pac-Man World. In Pac-Man World, Pac-Man comes here after hearing of his family and friends being kidnapped, and to defeat the devious Toc-Man. He gets here by rowboat on the stormy night that he discovers Toc-Man is throwing a party. Pac-Man gets to Ghost Island after he completes Buccaneer Beach in the Valley of the Pirates area. In Ghost Island, there are six different areas. When Pac-Man first arrives at Ghost Island, he can only go to Buccaneer Beach, Corsair's Cove, Crisis Cavern, and Space Race. After beating the first level in the area, or second in the Valley of the Pirate's case, Pac-Man can advance to the next level, and so on and so forth. After beating the first three areas, the next two are unlocked. After beating both of these, the final area is unlocked. To access the final level, Pac-Man must free all six of his friends from each of the six areas. Pac-Man also adventures here in Pac-Man World 2.

Valley of the Pirates

In this area, there a four large buildings that Pac-Man must enter to get into levels. There is also a small area for swimming, a cannon that can be fired after Butt Bouncing it (only once, until the player leaves Ghost Island, and comes back), and a large flag in the air. Pooka is held captive in Crazy Cannonade. There are four levels:

There are three temple-like buildings that Pac-Man must enter to go to other levels. Also, in the area, there are two large, flowing waterfalls. Pac-Man must cross a small bridge to get to the Plan C from Space area. Chomp-Chomp is held captive in Manic Mines. Unlike all of the other areas, there are only three levels in this area:

This area is just a flat surface with four space ships lined up against the wall. One is green, another red, one purple, and the Boss level is blue. Professor Pac-Man is held captive in Far Out. Pac-Man cannot get to the Haunted Funhouse area until he beats every level from Buccaneer Beach to King Galaxian, for there is a large wall blocking the way. There are four levels in this area:

Valley of the Pirates Bonus Level

In Pac-Man World 2, Pac-Man also comes to Ghost Island, although he's most likely venturing in a different area of it, as nothing quite looks the same as it did in Pac-Man World.  Ghost Island can be reached after the Ocean area, and it includes the levels Haunted Boardwalk, Night Crawling, and Ghost Bayou.