Golvis (ゴルビス Gorubisu) is a powerful Ghost who was banished long ago to the deepest reaches of space. He is the main antagonist of Pac 'n Roll. His partner is Jack, a magic guitar, whom also turns into a vacuum as well. While he may appear as intimidating and frightful at first, it was then revealed that Golvis is actually incompetent and clumsy, which caused the rest of the ghosts to banish him due to them being fed up with him. Golvis also appears to have a history with Krystal, a guardian fairy of Pac-Land.

Many years ago, Golvis was banished to the farthest reaches of space for his misdeeds by the ghosts themselves (in truth he was banished for his incompetence), and he has drifted through space in his UFO ever since.

In Pac 'n Roll, Golvis was summoned back from his banishment by the young Ghost Gang thanks to an idea by Pinky, so he could help them destroy Pac-Land on the day of the Harvest Festival. Golvis arrives on time to fight Pac-Man, though Pac-Man is only in training and Pac-Master instead takes charge, but Golvis used his guitar, Jack, to remove the limbs off of the Pac-People thus rendering them immobile. He then banishes them to the farthest reaches of Pac-Land. Pac-Man however was the only one left but luckily he was saved by the Fairy named Krystal, who managed to get rid of Golvis for the time being. She then teaches Pac-Man how to fight in his new form and with her help he matures and earns his strength.

At the end of the Gyro-Jungle, Golvis was looking for a place to set up his stage for an outdoor gig at Pac-Land so he can turn it into Ghost Land, when suddenly Pac-Man and Krystal caught up with him. Krystal points out since he's the boss, he's not supposed to appear until the end, but Golvis shrugs it off. Krystal then gives out the advice that Pac-Man needs to eat as much power pellets as he possibly can in a row to defeat Golvis, but the ghost laughs it off claiming still how one or two power pellets don't have an effect on him, as what Pac-Master tried to do right before he failed. After the fight, Golvis complains how they knew that it would take three power pellets to get him, much to the unamusement of Krystal. Enraged, Golvis leaves, saying how he'll get Pac-Man the next time they encounter. After Pac-Man manages to save Pac-Baby, he proceeds on his journey to save the other Pacs, as well as encountering Golvis numerous times in Sweet Land (where after the fight Golvis complains how they got him while he was dizzy, again, to the annoyance of Krystal. It even got to the point where Clyde and Pinky point out how much of a bonehead he really is.), Ghost Land (where Golvis complains about they only got him because his head was stuck), and the Flaming Fortress (where Golvis complains on how they would know he would get dizzy). Eventually, Golvis retreats into his UFO, taunting Pac-Man and Krystal that they will never reach him from up above. After saving Pac-Girl, Krystal finds a cannon which will launch Pac-Man to where Golvis' UFO is, and the two head on their way. Once they board the UFO, Golvis was shocked on how they managed to get here. Enraged, Golvis manages to challenge Pac-Man in one final battle on several parts of the UFO. Eventually, Pac-Man was able to reign victorious. Golvis eventually started to cry, wondering why Pac-Man was able to take advantage of his clumsiness. The UFO was starting the crash, but Pac-Man was able to save Pac-Master the moment the UFO exploded, knocking Golvis away to the ocean alongside with the Ghost Gang.

Golvis is later seen on a raft (in a form of a broken part of the UFO) with Blinky, Inky, Pinky and Clyde, where they are seen watching a T.V. on Pac-Man's success for the first time. Golvis asks if he can watch T.V. with them, but the Ghost Gang pushed him away due to his failures. Jack, now fed up with Golvis, then reveals that Golvis wasn't banished for being too evil, he was actually banished for his incredible incompetence, causing Golvis to cry, and much to the enragement of the Ghost Gang. It is unknown on what happened to Golvis after his appearance in Pac 'n Roll, but he was most likely either banished back into space, or he had decided to stay with the other ghosts in Ghost Land.

Golvis appears as a large, overweight, chartreuse-green ghost with dark blue eyes. He has a style to which of a 1980's punk rocker, with him having orange hair with purple highlights in the shape of a mohawk and orange eyebrows, he also appears to have four yellow spikes on his back as well. He also dons blue spiked wristbands, which are attached to dark purple, fingerless gloves as well. His notable trait as well is his dark purple pants, which also appear to be loose as it also shows pink briefs with red hearts on them underneath. They are fully exposed when Golvis becomes vulnerable to three power pellets, and also turns blue like all other ghosts. He also appears smaller in size when this happens.

In Pac-Man Monsters, Golvis is given a new makeover and design, two of which is him normally, and a form on him called "Funny Golvis", which consists of a overweight blue ghost with a magenta pompadour and purple pants. Jack also appears to be magenta in this as well. When Funny Golvis evolves, his appearance changes again this time being colored purple, with a blonde pompadour with two red stripes. He appears to don red pants, with Jack being colored blue as well.

Initially, Golvis was said to be a "Legendary Ghost" of sorts, being banished by even the Ghosts for his dangerous acts. He appears to be boastful and prideful, claiming himself to be the "King of Rock 'n' Roll", and claiming that one or two power pellets have no effect on him (which in all honesty, three power pellets is all it takes to take him down). Golvis appears to have a love for rock music as well, as evident with his style alone and how he talks. Golvis also likes to talk down and taunt his opponents as well, as evident when he uses Jack to remove all the limbs off of the Pac-People, laughing at their helpless state.

As it turns out, however, Golvis's main flaw that ultimately becomes his downfall is his clumsiness alone. It came to the point where he started failing so much due to his incompetence that the Ghost Gang, and even Jack started to become fed up with him. As it turns out, Golvis's "dangerous acts" are mainly with him being so incompetent and clumsy that the ghosts banished him after having to put up with him, though Golvis claims he didn't mean too. Golvis also appears to be a bad sport, throwing temper tantrums and complaining whenever he loses due to Pac-Man and Krystal taking advantage on how clumsy he gets or when he gets dizzy. He is determined to not give up on fighting Pac-Man, however, each time claiming how he'll get him next time, but ultimately failing in the end. 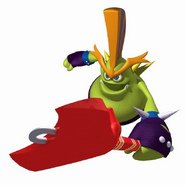 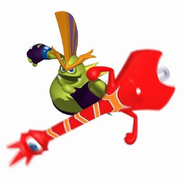 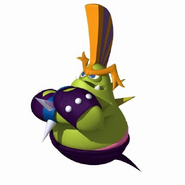 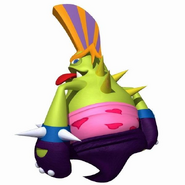 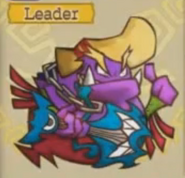