Jr. Pac-Man is an arcade game released in 1983 by Bally Midway. It could be considered the follow-up to Ms. Pac-Man.

The gameplay of Jr. Pac-Man is similar to that of its predecessors with a few differences. The maze is now two times the width of the display, and a virtual camera pans left and right along the maze to follow Jr. Pac-Man, sometimes resulting in the ghosts being off-screen. A total of seven mazes appear throughout the game, and unlike previous Pac-Man games, none of the mazes have tunnels that wrap around from one side of the screen to the other. Most mazes also have six energizers instead of four.

As in prior games, bonus items appear in each level, but they are now toys instead of fruit. They appear in the middle of the maze and bounce around for a while, but as a prize encounters dots, it changes them into larger dots that slow Jr. Pac-Man down (but are worth more points). If not eaten beforehand, a prize self-destructs when it encounters a Power Pellet and destroys them both.

There are also a few cosmetic differences: the main character is now Jr. Pac-Man; the orange ghost, called "Clyde" in Pac-Man and "Sue" in Ms. Pac-Man, is now named "Tim"; and the game's graphics and sound have been updated, including a lower-case anti-aliased font for scores and game text.

The game's intermissions center around the developing relationship between Jr. Pac-Man and Yum-Yum (the daughter of Blinky). This game features 3 intermissions, which are similar to the ones found in Ms. Pac-Man:

Unlike Pac-Man and Ms. Pac-Man, which have both been ported to practically everything, Jr. Pac-Man has only received three home console releases to date (with two additional canceled versions). This is most likely due to both Atari going bankrupt in 1984, and Namco failing to secure the game's rights.

In Pac-Man 2: The New Adventures, there is an unlockable game titled "Pac-Jr."; however, this is actually a modified version of Ms. Pac-Man starring Jr. Pac-Man, rather than an actual Jr. Pac-Man port.

There are also homebrew versions for the Atari 7800 and Intellivision.

These versions of Jr. Pac-Man are either listed in the public domain or are considered abandonware. Clicking the game title will lead you to a playable online version of it from archive.org (mobile compatibility may vary).

Original arcade machine; notice the Mappy characters on the side from the sticker being ripped. 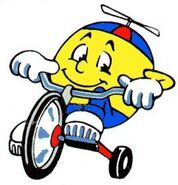