Krystal, known simply as Fairy (フェアリー Fearī) in Japanese, is the guardian fairy of Pac-Land who acted as Pac-Man's guide and ally in Pac 'n Roll.

After Golvis was resurrected by the Ghost Gang and kidnapped several inhabitants from Pac-Land, including the Pac-Master and his family, Krystal appeared to stop him. Recognizing Golvis from the past, Krystal immediately attacked the evil Ghost. He used his guitar, Jack against her, but she dodged his attack, forcing him to get sucked into his own trap. She then found Pac-Man, the only Pac-Person not captured by Golvis, and told him that he must defeat Golvis. She traveled with Pac-Man through the Gyro-Jungle, where they found Golvis preparing to set up for his show. Krystal advised Pac-Man on how to defeat Golvis, which he succeeded in doing.

She followed Pac-Man through until Golvis escaped in his UFO. She then told Pac-Man he must use a cannon to shoot himself up to the UFO. He reluctantly complied, allowing the two heroes to battle Golvis one final time. With Golvis defeated, his UFO was about to crash. Krystal and Pac-Man quickly escaped, though it is unknown what became of Krystal after Pac-Man became a celebrity.

Krystal is a fairy with blond hair who wears a small red dress and wears an orange flower with a leaf to head. She has two pairs of wings instead of the usual one.

Krystal is very sarcastic and ironic when talking to Golvis. She is very determined in what she does, and she was very clever when she found Golvis's hideout. She can get very angry when others refuse to do what would be right. 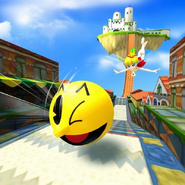