For more information on this character, see [Mario on Super Mario Wiki].

Mario is a video game character made by Nintendo, and the star of the Super Mario series. Since his debut in 1981, he has appeared in hundreds of games (and other media), some of which have been alongside the Pac-Man cast.


Mario's voice actor, Charles Martinet, narrates parts of the game in his traditional Mario accent. The game was also developed by Shigeru Miyamoto, the original creator of Mario (and Donkey Kong).


Mario can dress up in a Pac-Man costume via the Mystery Mushroom. This was intended as a tie-in with the Pac-Man amiibo, but it can be unlocked without the amiibo as well.


By scanning a Pac-Man amiibo, a Pac-Man yarn pattern for Yoshi can be unlocked.

Pac-Man and Mario have never had a direct film crossover. However, Pac-Man and Bowser appear in Wreck-It Ralph, and Pac-Man and Donkey Kong are both featured in Pixels. 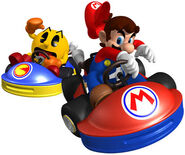 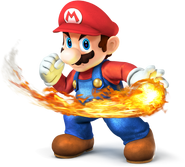 Super Smash Bros. for Nintendo 3DS / Wii U
Add a photo to this gallery
[v · e · ?]
Retrieved from "https://pacman.fandom.com/wiki/Mario?oldid=27929"
Community content is available under CC-BY-SA unless otherwise noted.