Miru (ミル Miru) is a friend of Pac-Man. She is a Ghost, but means no harm against others.

In this game, Pac-Man has to collect all of the fruits in the Maze. Miru helps him by picking up fruits and bringing them into the Ghost Pen.

Miru appears as a playable character in Minecraft's Pac-Man DLC. She is the only character aside from Pac-Man himself who is unlocked by default.

A very tiny cameo; Miru sits next to Jr. Pac-Man and Baby Pac-Man in the Theater, fist-pumping to the Pic-Pac band.

In the Nintendo DS version of Pac-Man Vs. (included in Namco Museum DS), an 8-bit Miru mural appears in the "Block" level.

Miru is a green, blob-like character, similar in appearance to Kirby. She has no mouth, but has very large, cute eyes. She wears a pink bow and shoes. 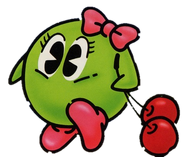 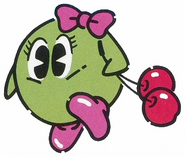 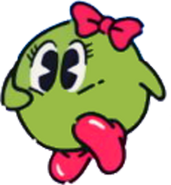