Ms. Pac-Man: Quest for the Golden Maze is a PC game released in 2001 by Infogrames. It is the third (and currently final) game to star Ms. Pac-Man.

Quest for the Golden Maze plays very similarly to the original Ms. Pac-Man. The player maneuvers Ms. Pac-Man through the mazes to collect all the Pac-Dots while avoiding Blinky, Pinky, Inky, and Sue. Ms. Pac can also grab a Power Pellet in order to eat the ghosts.

Occasionally a small green ghost (named Baby Ghost in the manual) will appear on the screen. When touched, he will spawn a power-up in the center of the maze.

Sometimes walking through a side door will lead to a bonus area, where Ms. Pac must eat as much fruit on the screen as possible. If all fruit is collected a Golden Fruit is earned, which is worth 100 times the fruit's normal amount (ex: regular cherries = 100 pts, golden cherries = 10,000 points).

The game also includes a two-player mode, where two Ms. Pac-Men play simultaneously, differentiated by their bow and lipstick color. It is unclear whether they are the same mazes as the normal game mode or not. 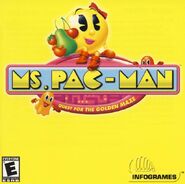 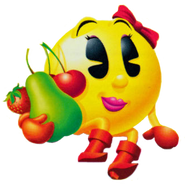 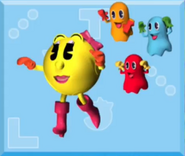