Tengen's Ms. Pac-Man is a variation of the original Ms. Pac-Man arcade game, originally released for the NES in 1990.

At first, the game appears to be identical to the arcade original. The player navigates Ms. Pac-Man through the maze, collecting dots and avoiding the Ghosts. It is a near-perfect rendition of the original, and is rather technically impressive for NES hardware.

What makes this port stand out are its many new mazes. There are four selectable gamemodes, each with their own unique maze layouts. They include:

Other big features of this version are two player co-op and competitive modes. Both Ms. Pac-Man and Pac-Man appear on-screen at the same time, and can work together to clear the maze. In competitive mode, when one player eats a Power Pellet however, the other Pac-Man will frown, and only the pellet-enabled Pac can eat the ghosts. In this mode, each player competes for the high score. In co-op mode, both players are able to eat the ghosts when one eats a power pellet. In this mode, each player has their own score as well as a shared combined score. The classic "alternating" 2P mode is also available.

There are several difficulty/speed options as well. The game can be set to Easy, Normal, Hard, or Crazy difficulty, and the "Pac Booster" (changes Ms. Pac-Man's speed; seemingly based on the speed-up chip) can be enabled or disabled. Also, the player can continue up to four times after they get a game over.

The game ends on Level 32, even in Arcade mode. An "Act 4" is displayed, where Pac-Man and Ms. Pac-Man wave goodbye at the player; then many Baby Pac-Men appear, running around the screen. If you’re playing the SNES and Sega Genesis versions, you’ll see the Pac-Man family on a beach with the words “The End” above instead.

In most emulators, this game features broken graphics, with the scoreboard and some other garbage being duplicated onto the maze. This even happens on some actual consoles, like the Retron 5.

It should be noted that this game, while licensed by Namco, was not licensed by Nintendo. A Nintendo-approved NES version of Ms. Pac-Man was released in 1993 by Namco Hometek, but it is a different port entirely, and is commonly considered inferior to Tengen's version.

The Genesis version was released in July 1991, officially licensed from Sega. The graphics have received a massive overhaul, appearing 16-bit rather than 8-bit. Otherwise, the Genesis version is the same as the NES.

It is worth noting that when played on a modern Sega Genesis (Genesis 3, AtGames console), the controls do not work right. To fix this, hold down the "Mode" button on the top of controller while powering the system on.

The Master System version was released in December 1991, exclusive to the U.K. and Brazil (Tectoy). The colors are rather strange in this version, as are the graphics. The physics aren't as "arcade-accurate" as the previous ports were.

The SNES version was released in 1996, this time licensed by Nintendo. It is identical to the Genesis port, save for a slightly lower screen resolution. 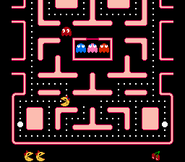 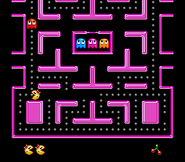 SNES
Add a photo to this gallery 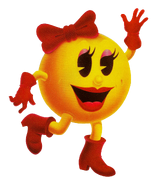 Ms. Pac-Man
Add a photo to this gallery

Retrieved from "https://pacman.fandom.com/wiki/Ms._Pac-Man_(Tengen)?oldid=29803"
Community content is available under CC-BY-SA unless otherwise noted.