Originally, Pac-Attack started as an arcade game called Cosmo Gang - The Puzzle, which released a year prior. When localizing the game for North America and Europe, Namco realized that the game's formula was a great fit for the Pac-Man characters, and heavily altered it to feature them.

Pac-Attack seems to have been more successful than Cosmo Gang, as future Japanese releases retained the Pac-Attack assets, starting with the Game Boy version in 1994.

The game is somewhat similar to Tetris. The player drops L-shaped brick formations made up of three parts; some spaces may be occupied by Red Ghosts or Pac-Men (Aliens and Marbles in Cosmo Gang - The Puzzle). If a Pac-Man is positioned in front of ghosts, they will turn blue and he will eat them. A Pac-Man will appear once every three blocks (although they become more spread apart overtime).

If the blocks overflow to the top of the stage, the game is over. To avoid overflowing, the player can clear a row of blocks by creating one without any ghosts in between. This is easier said than done - ghosts can be easily trapped underneath blocks, which Pac-Man will not be able to eat unless all the lines on top of said ghost are cleared. Luckily, Fairies will be summoned when the Fairy Meter on the side is completely filled - they will clear all ghosts on-screen.

Pac-Attack also has a two-player competitive mode, which follows the same rules as a single-player mode, in addition to several new quirks. The first player is represented as Blinky, and the second player as Sue.

New to Pac-Attack and not featured in Cosmo Gang is a "Puzzle Mode" - a set of 100 levels in which Pac-Man must eat all of the ghosts on-screen using a limited amount of blocks. There is a built-in password system, so all levels do not have to be beaten in one sitting.

The Japan-exclusive Namco Anthology 2 for PlayStation features a remake of Pac-Attack, in addition to including the original game. This version features space-themed background elements - this would imply it was a Cosmo Gang remake at some point, before being changed to Pac-Attack later on. Despite being emphasized as a remake of the original, it doesn't include any new features save for fancier graphics (in fact, it has less than its SNES counterpart, as the Puzzle Mode is missing). This variation of Pac-Attack was also included in Pac-Man World 2 as an unlockable bonus.

The SNES version was the first to be released, which was shortly proceeded by a nearly identical Sega Genesis port. Most modern rereleases use the Genesis version of the game. The Game Boy version has additional features when played on a Super Game Boy (extra colors). An arcade version is rumored to exist, but nothing of it has been found.[1]

Cosmo Gang - The Puzzle had ports for Super Famicom and Wii (Virtual Console), both of which were Japan-exclusive.

These versions of Pac-Attack are either listed in the public domain or are considered abandonware. Clicking the game title will lead you to a playable online version of it from archive.org (mobile compatibility may vary). 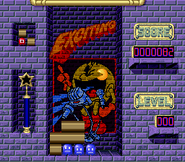 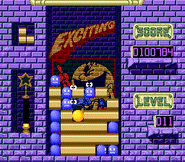 Sega Genesis
Add a photo to this gallery 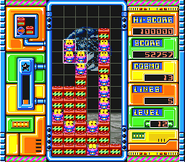 Super Famicom
Add a photo to this gallery 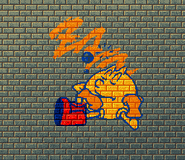 Artwork from the SNES version.

Beta artwork for Pac-Attack (watermarked).
Add a photo to this gallery