Pac-Carnival is an arcade game released by Namco in 1996. It is a video game adaptation of Carnival, a mechanical game released nine years earlier.

Gameplay is the same as the 1987 original, aside from the number values being changed slightly (2, 3, 4, 8, and 12 - center bonus is 99). Most of this version's differences lie in its animated visuals, which feature Pac-Man running around the wheel, landing on the numbered spots. 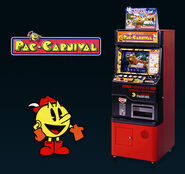 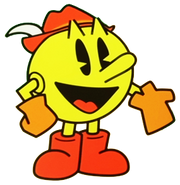