Pac-Land (パックランド Pakku-Rando) is an arcade game released by Namco in 1984. It is the first platformer in the Pac-Man series.

Pac-Land is a side-scrolling platformer, where the objective is to get from one side of the screen to the other. The player controls Pac-Man, who must travel through Pac-Land to return a Fairy (who is underneath Pac-Man's hat) to Fairyland.

Each trip has four rounds - the first three to get to Fairyland, and the fourth to head back. Starting at his house, Pac-Man will travel through towns, forests, mountains and more as he delivers the lost fairy back to its mother. Generally these are fairly straightforward paths, going from left to right (right to left on each fourth round), aside from the many obstacles in Pac-Man's way.

Every time one of the first three stages is completed, a sign labeled "BREAK TIME" will appear; Pac-Man can jump in these segments in-time to the music, and he will get a certain number of points depending on his jump's distance from the ground.

Once Pac-Man reaches Fairyland in the fourth stage, he is greeted by the Mother Fairy, who gives him magical boots that allow him to fly. He travels back home, to which he is greeted by Ms. Pac-Man, Baby Pac-Man, Chomp-Chomp and Sour Puss. Directly after this, the next set of rounds start, and the process repeats until all lives are lost.

Along the way on his journey, the Ghost Gang do their best to stop Pac-Man. Blinky, Inky, Pinky, and Clyde now ride in different machines in attempt to ambush Pac-Man, including cars, buses, UFOs, and planes. Plane ghosts are particularly dangerous, as they throw micro-ghosts down at Pac-Man which are hard to avoid. Ghosts can appear in building windows as well, serving the same function as plane ghosts.

Sue also appears, but she just chases Pac-Man from behind if he is walking in the opposite direction - that is, unless the timer runs out, in which case Sue goes super fast and will kill Pac-Man in one hit. As with previous games, she can be eaten if Pac-Man eats a Power Pellet.

Pac-Man will encounter many non-Ghost obstacles as well, including:

Later in the game, two entirely different kinds of levels appear - Sunken Ships and Castles - which are loaded with obstacles of their own. Sunken ships require the player to make precision-perfect jumps over thin planks; to make some jumps, Pac-Man will need to collect ship symbols, which make the planks longer. Castle levels feature three paths, and many locked doors, which require keys to be opened. If Pac-Man takes too long, Sue will run out and attack him. Some of these levels are in complete darkness as well, making them even harder.

Many items appear throughout the game, which include:

Fruits also make a return, which appear throughout the stage(s). As more are collected, their point value increases (until four have been eaten, in which it resets the same pattern). These are the fruits that appear, next to their sequential point value:

Pac-Land was heavily inspired by the Pac-Man TV series, with many references to it. The most obvious connection is the music, which is an 8-bit rendition of the cartoon's theme song. Some of the game's other tracks, like the one that plays in the Castle levels, is background music lifted the show as well. Pac-Man and the ghosts also dawn hats like their Hanna-Barbera counterparts.

In the Bally Midway U.S. release, even more visual connections were added that directly reference the TV series - all of the Pac-Men have white circles around their eyes, Pac-Man's hat looked more like a fedora, Ms. Pac-Man was given brown hair, Baby Pac-Man's bow was colored blue, and Chomp-Chomp and Sour Puss were added to the ending screen, both of whom are completely absent in the Japanese version.

A release of Pac-Land was planned for the Atari 8-bit computer series (400, 800, XL and XE), but never got passed conceptual stages. A prototype was built, but it only featured minimal coding with mock-up screenshots.[6]

The PC Engine/TurboGrafx-16 port features a special, more challenging game mode called Pac-Land Pro. It is unlocked by beating the game and viewing the ending. Alternatively, it can be started via the cheat code below:

Console releases of Pac-Land are less common than the other (Namco-owned) Pac-Man games, which is speculated to be due to Hanna-Barbera (now technically Warner Bros.) owning the music tracks. 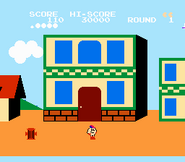 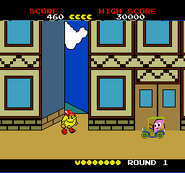 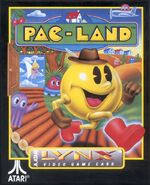 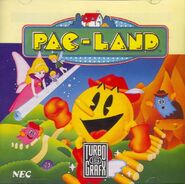 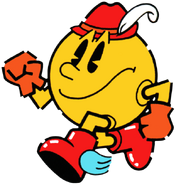 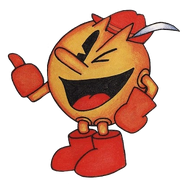 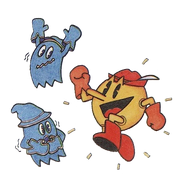 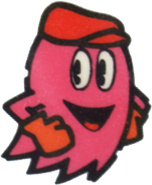 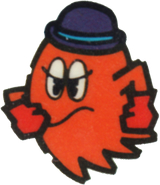 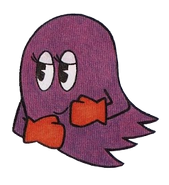 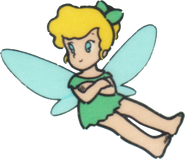 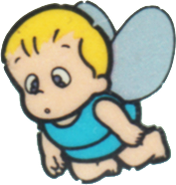