For information on the version of Pac-Man who appears in Pac-Man and the Ghostly Adventures, see Pacster. For other uses of Pac-Man, see Pac-Man (disambiguation).

Pac-Man (パックマン Pakkuman), formerly known as Puck Man in Japan, is the main protagonist of the Pac-Man series. He is the husband of Ms. Pac-Man, and the father of Baby Pac-Man and Jr. Pac-Man.

Pac-Man was created by Toru Iwatani, and is Namco's famed mascot. Since his first appearance in 1980, Pac-Man has become a legendary video game icon and is one of the most recognizable fictional characters in the world.[1]

Pac-Man's first adventure chronologically took place in Pac-Man, wherein he had to fight off a group of Ghosts consisting of Blinky, Pinky, Inky and Clyde, while eating all of the Pellets scattered around a maze.

Many other titles in the franchise follow the same basic plot, including:

In the game Ms. Pac-Man, Pac-Man fell in love with Ms. Pac-Man. In the original arcade release, Pac-Man only appeared in cutscenes, and was not playable; though in various ports of the game (Game Boy, Tengen versions, etc.), Pac-Man is playable as the Player 2 character. He also had his first child with her, Jr. Pac-Man, in this game.

Sometime later in the game Pac-Land, Pac-Man must travel through his homeland of Pac-Land to save the fairies who have been taken by the mischievous Ghosts.

Pac-Man's second adventure canonically began in the DS game Pac 'n Roll. In his youth, Pac-Man trained under the mighty Pac-Master during his summer vacation. He taught Pac-Man all about fighting and power pellets, so he could help in defending Pac-Land from the many Ghosts that plagued it. During his training he grew close to Pac-Master's family, he especially grew close to Pac-Master's beautiful daughter who would one day become his future sweetheart, Ms. Pac-Man.

Sadly, the joy would not last for long, as a young group of Ghosts were planning to summon a powerful Ghost named Golvis, who had been banished to the far reaches of space, to defeat Pac-Master. Golvis used his magic guitar Jack to turn every Pac-Person into limbless orbs, thus making them unable to move. The guardian spirit of Pac-Land, Krystal, temporarily defeated Golvis, but was only capable of saving the young Pac-Man. She then convinces Pac-Man to help her save Pac-Land, as he is the only one left. After traveling throughout all of Pac-Land they finally reach Golvis' home base where, with their combined forces, finally defeat Golvis, thus restoring the bodies and saving all the Pac-People.

His next adventure took place in Pac-Man World. On the day of his 20th birthday, Pac-Man's Family was planning a big surprise party for him, but the evil Pac-Man impostor Toc-Man sent out his minions to kidnap his entire family. Pac-Man set out to rescue his family and get rid of Toc-Man (who, in the end, is revealed to be a ghost named Orson).


In Pac-Man World 2, the Ghost Gang sneaked into the Pac-Village. They unwittingly picked the Golden Fruit off the tree in the center of the village, releasing Spooky, an ancient ghost imprisoned underneath. Pac-Man must travel from Pac-Land to Ghost Island to reclaim the Golden Fruit and stop Spooky.


In Pac-Man World 3, on his 25th birthday, Pac-Man is suddenly teleported all around Pac-Village and then into a waste dump. The one responsible for this was Orson, the evil ghost from the first game, who desperately needs Pac-Man's help.

In 1982, Hanna-Barbera produced the animated television series Pac-Man, which featured the misadventures of Pac-Man and his family in Pac-Land. Pac-Man is seen in the show taking care of his family, going to work guarding the Power Pellet Forest, or defeating ghosts when he needs to. The Ghosts have a leader in this show - a pale green-skinned humanoid named Mezmaron - who wanted to defeat Pac-Man and seize the Power Pellets.

Pac-Man was often addressed as "Packy" by his wife Ms. Pac-Man, who he would address as "Pepper". Pac-Man himself was voiced by veteran comedian and writer Marty Ingalls.


Pac-Man appears as one of the playable characters. Pac-Man is a fast character and drives a "light", four-wheeler vehicle.


After a new evil comes to Pac-Land, Pac-Man must travel far and wide defeating and recruiting all manner of Ghosts and Monsters while gaining more power to combat the new evil.


A game seemingly taking place right after the original Pac-Man, in which Pac-Man must continue to survive against the ghosts in the maze while also trying to escape from the evil Glitch destroying everything.


Pac-Man appears as a third party character in several Super Smash Bros. games. His appearance and moveset is largely influenced by arcade Pac-Man and other Namco titles from the 80s (most prominently Pac-Man, Super Pac-Man, Pac-Land and Mappy).


Pac-Man has appeared as a playable racer in several Mario Kart games, specifically the arcade ones. Alongside Mario and all his friends, he is joined by Ms. Pac-Man and Blinky, as well as Bandai's Mametchi. He is replaced with Pacster in Mario Kart Arcade GP DX.

Pac-Man makes a cameo appearance in Disney's 2012 film Wreck-It Ralph, where he was shown at Fix-It Felix Jr.'s Penthouse party, commemorating his game's 30th anniversary. Later, Ralph loses his temper and accidentally wrecks a cake, pelting Pac-Man with bits of it, and Pac-Man does a jaw drop at Ralph's behavior.

Pac-Man appeared as an antagonist in the 2015 film Pixels as one of the arcade invaders attacking New York City. When confronted by the films protagonists, Toru Iwatani is among them and tries to reason with his creation, even calling him his son. However his touching words have no affect on the alien Pac-Man, who proceeds to bite off Iwatani's hand and continue rampaging through the city.

While eating everything in his path, Pac-Man is then chased by the heroes in their souped-up ghost cars which they use to tackle Pac-Man with fields of energy which KO him on impact. After several chases throughout the city and three hits, Pac-Man is seemingly destroyed and the city saved. At the end of the film, Iwatani's hand is restored by the aliens after their defeat.

This film is the eighth of a series of Kamen Rider crossover films called Movie Wars. Much like in Pixels, Pac-Man is an antagonist, but isn't actually at fault as his likeness was used by the main villain to infect the world with a virus of his likeness.

A Pac-Man game themed item, known as the Pac Adventure Gashat, is given to Kamen Rider Ex-Aid in a spin-off YouTube Special. Numerous references are made to the original game with this power-up (such as Ex-Aid needing to obtain a 'Power Cookie', based on the Power Pellet, to be able to successfully damage his foe).

Pac-Man loves to eat. His regular meal includes Pac-Dots, Power Pellets, and fruits such as Cherries, Strawberries, and Oranges. He also seems very good at navigating mazes, due to his extensive time in them.

In the 1980's cartoon and the later Pac-Man games, Pac-Man was a fairly easygoing sort and a dedicated father and husband. While he would often get perplexed by most situations he found himself in, he would always come out on top of them.

In Pac-Man World 3, Pac-Man is shown speaking in full sentences. He is shown to be a nice person, even willing to help Orson, Blinky, and Pinky. That said, he's also shown to have a snarkier side.

Pac-Man is a yellow circular creature with a large mouth. He has a long, Pinocchio-like nose and two eyes which are shaped like himself. He commonly appears with arms and legs in artwork, but he is often limbless within the games themselves. He often wears red boots and orange gloves, and occasionally has a red hat as well.

Some earlier incarnations feature slightly different designs, most notably the Bally Midway artwork seen on U.S. arcade machines, which features Pac-Man as a red-eyed blob with long feet. Since around 1983 or so, his overall design has remained much more consistent.

Pac-Man has different abilities, as well as those received from Power Ups, found in various Pac-Man games.

A superhero alter-ego of Pac-Man. First seen in Super Pac-Man, Pac-Man grows huge and can run through maze walls and ghosts. In some later games, it gives Pac-Man the ability to fly instead. It is gained by eating a Super Pellet. This ability also appears as his Final Smash in the Super Smash Bros. series.

While the Galaxian appeared as a fruit in some preceding games, it acted as a power-up in Pac & Pal. When Pac-Man eats one, he can stun the ghosts by shooting a capture beam out of his mouth (a reference to the 1981 arcade game Galaga).

This attack can be used by jumping with the X button, then pressing it again while in air. There is a rare power-up where if the player touches it, Pac-Man gains the ability to do a Super Butt Bounce where if the player does the control for a normal butt bounce, a huge explosion will occur and any enemies in a certain radius will be terminated. It can only be used once per power-up.

Pac-Man will run in place at a high speed and releasing the button will have him roll into a ball in any direction in which he is pointed. Using the Rev Roll on a ramp will send him high into the air. It can be used to destroy most enemies.

If Pac-Man has at least one Pac-Dot he can shoot one from his hand like a bullet and damage enemies.

This attack is a stronger form of the previous attack. To use this attack, hold down the O button and Pac-Man will do the exact same thing, except he will spin around and then shoot a huge blast of Pac-Dots from his hand. There is also a requirement for this attack. Pac-Man must have at least 10 Pac-Dots to use it.

Using the Steel Ball Power Up, Pac-Man's body will become steel and he can hardly be damaged. He can stand on fire and walk across lava.

Using the Shrink Pellet Pac-Man will shrink in size and will be able to go through small doors. But enemies can squish him like a bug. Pac-Man is very good at using this ability. It is very uncommon for him to be attacked when he is very small.

Using the O or B button, Pac-Man can punch at enemies.

With the Electro-Shock Power Pellet, Pac-Man can also perform an Electric Shock with the same button command. Pac-Man will be able to shoot electricity from his hands and can damage or stun enemies.

If you hit the X or A button 4 times, Pac-Man will preform a Triple Butt Bounce. A small shockwave comes out of Pac-Man.It can kill up to 2 enemies at a time.

Using the Red Ribbon Power Pellet Pac-Man's body will glow. When running a red afterimage will follow behind him. If he creates a ring around enemies the ring will close and do damage to them. 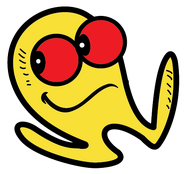 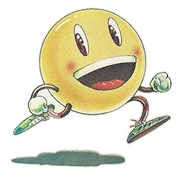 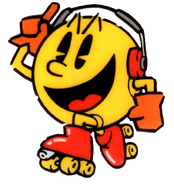 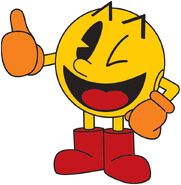 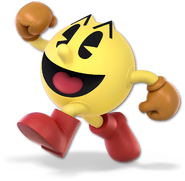