PC (compatible with Windows 95 to Windows 10)

1 player (up to 4 players in some bonus modes)

The game begins with Inky and Clyde (hesitantly) giving the main villain, Mollusc, a golden Power Pellet known as the Artifact. Mollusc destroys the Artifact, scattering its pieces into five key periods of time itself. To prevent the Artifact from ever being destroyed, Pac-Man journeys, via time machine, through the Prehistoric Era, Egyptian Times, Medieval Times, the Wild West, and the Future.

Adventures in Time follows the same gameplay formula from the original Pac-Man. The player must collect all of the Pac-Dots in each maze, whilst avoiding Ghosts and other obstacles. Pac-Man also has the ability to jump, but there is a few seconds delay after each jump, so they must be timed perfectly.

The main "gimmick" of this release lies in the mazes themselves. Being rendered in 3D, they can feature slopes, "natural" obstacles like rolling boulders, and even second-stories hovering above the lower maze. Some mazes take the shapes of cubes, spheres, and cylinders, rather than just being flat. The levels can be played in either an overhead view (much like the original arcade games) or a fully 3D display, which better exaggerates the features and environments surrounding Pac-Man.

The ghosts are similar to their appearance in previous Pac-Man games, but each ghost's appearance is altered depending on what location they are in. If the player takes too long in a level, a warning siren plays and the message "Blinky Approaching" appears; Blinky will now become faster and more aggressive.

Many minigames are included in the game as well in between levels. They include:

Adventures in Time features many cheat codes, which can be entered by pausing the game and typing them out on the keyboard, usually in Caps Lock. Some notable codes include:

Allows the player to replay through single mazes after they are unlocked in the Quest Mode. Several new mazes appear in this mode as well, after the game is beaten.

The game also features a multiplayer mode, which is the same as the one found in Ms. Pac-Man Maze Madness, on slightly different boards. Originally the release featured both local and distant online play as well, but the servers are long gone. The playable characters are Pac-Man, Ms. Pac-Man, Baby Pac-Man and Professor Pac-Man. 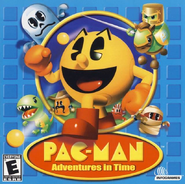 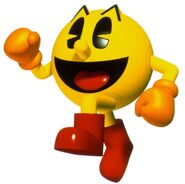