The Pac-Man Coleco Tabletop is a tabletop arcade machine released by Coleco in 1981. It is based on handheld LCD game technology, and was intended for home use. It was released in Japan as Super Puck Monster.

A port of the original Pac-Man. A rather close port for the time period, especially for LCD technology. Some key features are missing however, most notably Fruit.

A two player co-op mode, with two Pac-Men on screen at once. Otherwise the same as the first mode.

Guide Pac-Man to collect the four Power Pellets and bring them to the Ghost Box.

These versions of Pac-Man (Coleco Tabletop) are either listed in the public domain or are considered abandonware. Clicking the game title will lead you to a playable online version of it from archive.org (mobile compatibility may vary). 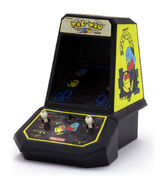