"BEWARE OF THE GLITCH!"

Pac-Man 256 is a mobile free-to-play game for iOS, Android devices. It was developed by Hipster Whale and published by Bandai Namco Entertainment in 2015, in celebration of Pac-Man's 35th anniversary. It is based on the Map 256 Glitch from the original arcade game.

The player needs to advance northbound from the slowly advancing glitch, traversing a never-ending maze. At the same time, Pac-Man has to collect Pac-Dots and avoid the Ghosts. Hitting a ghost or touching the Glitch will end the game.

The player can choose three power-ups to use in each game, that will appear randomly on the map, available to be collected and used. Eating 256 dots in a row (256 Pac-Dot Chain) will cause a huge explosion that wipes the map of ghosts.

In game, the player can collect credits, which are used to upgrade power ups and buy new themes (maps to play on). Credits can also be earned by watching advertisements (in mobile). Achievements can also give credits when completed, such as "collect 5 Tornado power ups".

Pac-Man 256 was ported to PlayStation 4, Xbox One and PC in 2016, costing $4.99. Gameplay has some minor differences. There is a multiplayer mode, and gifts are randomly given. To get new power-ups you have to eat Pac-Dots every run. In multiplayer, 2-4 players share the same map, power ups, etc. Players can choose different skins to distinguish one another. When one player dies in multiplayer, a respawn cube will appear, similar to power ups, ready for the alive companions to collect; once collected, one dead player will respawn.

Power-ups are designed to give the player an advantage against fighting/escaping ghosts, collecting more pellets, or simply getting more points. One power up is unlocked every 24 hours, and 3 can be used on one game. Along with the power up loadout selected, players can also pick up Power Pellets, which let Pac-Man eat the ghosts.

The following table is a list of power-ups in unlocking order.

When a power up is collected, all other power up items are replaced with larger square Pac-Dots that slightly prolong the effect of the power up when eaten. These dots revert back to the power ups when the current effect fully wears out.

Unlike regular Pac-Man, more than one ghost of the same color can appear. Each ghost has their own AI; most race after the player to kill them.

There are 10 achievements, one of which is only available on the console and PC versions.

The following in-app purchases are available to the player:

As of version 1.1, Pac-Man 256 introduces themes, which changes the appearance of the entire maze, including ghosts, pellets, power-ups, fruits, and Pac-Man himself. All themes either cost $0.99 or 2048 coins on mobile; they are included free in the PC & Console versions with one extra one not included in the mobile version. The following themes are currently available: 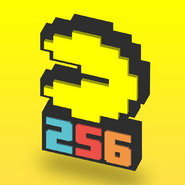