Were you looking for Pac-Man II?

Pac-Man 2: The New Adventures, known as Hello! Pac-Man​ in Japan (ハロー!パックマン Harō! Pakkuman), is an adventure game released by Namco in 1994.

While it is technically the direct follow-up to the original Pac-Man, Pac-Man 2 has little to no resemblance to the arcade game, except for the ability to play the original in the game. The player plays the role of an observer and assistant, that follows Pac-Man as he sets out to accomplish various tasks. Pac-Man himself walks around and interacts directly with the player, as well as with objects and other characters. The player cannot control Pac-Man directly, but instead can direct his attention in various directions, and is armed with a slingshot (represented by a small crosshair) that can be used to strike certain objects, including Pac-Man himself.

Pac-Man's mood varies throughout the game, usually in response to his environment or the player's actions, and generally his mood affects his actions and his willingness to cooperate with the player; the varieties of "bad" moods can at time compromise the player's ability to progress. There are a few instances, however, where Pac-Man is required to be angry or frightened. Hitting objects with the slingshot can often get Pac-Man to look at that object and piece together parts of the puzzle he is currently trying to solve - for example, hitting a door may cause Pac-Man to go inside a house to discover a clue. But beware - a few objects when hit can also produce disastrous (and humorous) results. Hitting a trash can on a city street at the wrong time, for example, can cause a cat to jump out and attack Pac-Man.

Throughout the game, Pac-Man is occasionally harassed by the four ghosts. When this happens, Pac-Man is paralyzed by fear and eventually faints, unless the player gives him a Super Pellet. Then Pac-Man becomes Super Pac-Man for a brief time and flies around, eating the ghosts. Three Super Pellets can be held at a time, and more can be found growing on trees. In some cases, the ghosts may leave behind important objects.

The game centers around Pac-Man as he sets out to complete a series of tasks for his family. The player must first help Pac-Man and Ms. Pac-Man find milk for their baby. After accomplishing this, Pac-Man is tasked with going to the mountains to pick a flower for Lucy's birthday. His third task is to retrieve Pac-Jr.'s stolen guitar. In the final segment of the game, Pac-Man watches a news segment in which the ghosts are stealing gum from children all over the city, when the Ghost Witch of Netor takes over the broadcast and tells Pac-Man that her Gum Monster is nearly complete. He sets off to work his way through the abandoned factory where the monster is being created. The game culminates in a battle between Super Pac-Man and the Gum Monster, and after defeating it, Pac-Man is congratulated by the town and his family as a hero (except for that he didn't save their ABC gum).

The original SNES and Genesis versions were released on the same day. The SNES version is generally considered the better of the two, as it has higher quality music and sound effects. Besides that, both versions are equal to each other. 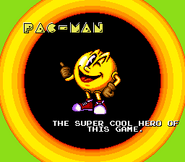 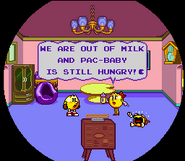 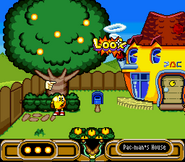 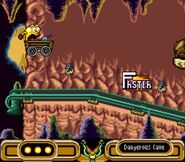 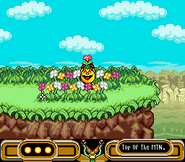 Pac-Man at the final boss , the Gum Monster 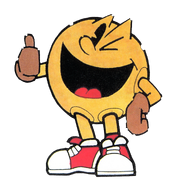 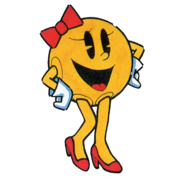 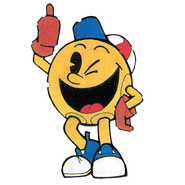 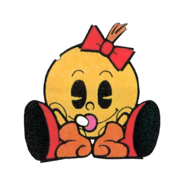 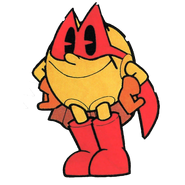 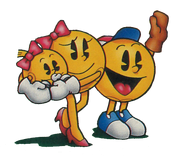 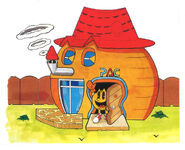 Pac-Man at his house.
[v · e · ?]
Community content is available under CC-BY-SA unless otherwise noted.
Advertisement