The player controls one of four Pac-Men (yellow, red, blue, or pink), and must eat the other Pac-Men on screen while avoiding ghosts. Eating a Power Pellet will turn the Pac-Man huge (à la Super Pac-Man), and allow him to eat his opponents. The maze is set up in a similar fashion to Pac-Man Championship Edition. The game usually consists of 3 rounds, with the mazes getting increasingly larger each round. After said third round is completed, the final scores are tallied. The one who ate the most Pac-Men is the true winner, but other players are given achievements as well (most fruit collected, most ghosts eaten, etc.).

Three different arcade machine types are known to have been produced:

The PlayStation 3, Xbox 360, and Windows ports were included as part of Pac-Man Museum. 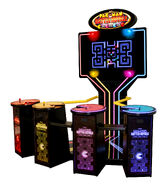 English flyer for the game.