Pac-Man Plus is an arcade game released by Bally Midway in 1982. It is a hack of Pac-Man that adds several new features. No dedicated Pac-Man Plus machine was ever created, so the game is only found in converted Pac-Man cabinets.

Starting in 1981, many bootleg hacks and modifications of Pac-Man were being released. These were easily installed into arcade machines, and altered various functions of the game (different mazes, faster speeds, etc). Many of these were borderline unplayable, and could have hurt the Pac-Man brand if wide distribution continued.

To combat this, Midway decided to release their own "official" modified Pac-Man kit, in hopes that arcade operators would see it as a cheap, less shady option to install into the aging machine. This strategy seems to have been moderately successful, but in the end the bootleg "fast speed" hack was still the most popular Pac-Man modification. (Midway eventually began selling their own version of the speedup kit, which was identical to the bootleg.)

Despite advertising stating that the game was "Exciting!" and "New!", Pac-Man Plus is essentially identical to the original Pac-Man, with only minor gameplay tweaks and altered graphics. These are the features found in Plus that aren't in the original game.

A game titled Ms. Pac-Man Plus was released seemingly around the same time as Pac-Man Plus. As its name implies, it is a "plus" version of Ms. Pac-Man.

The game is credited to Midway, but is of rather poor quality, to the point where it resembles a bootleg hack. But as their name is intact on both the title screen and marquee, it is more likely that it was an actual Midway release, possibly only test-marketed in select arcades before fading into obscurity. There is also evidence it could be legit, because certain ads for Ms. Pac-Man used screenshots from Ms. Pac-Man Plus. This could also just be a mistake.

Ms. Pac-Man Plus is just maze hack of the original game, lacking the extra features seen in Pac-Man Plus. The way the mazes were redone can lead to glitches, such as ghosts or fruit getting stuck within the maze's walls. All other features from Ms. Pac-Man remain intact, with no changes whatsoever.

Because there were so few differences between Pac-Man and Pac-Man Plus, the game was never ported to home systems during its heyday. There are many homebrew versions of the game however - mostly hacks of already existing Pac-Man ports - including ones for the Atari 2600, Atari 5200, Atari 7800 and ColecoVision.

Unsurprisingly, no home ports of Ms. Pac-Man Plus were released. As with Pac-Man Plus, there are several homebrew-hacked versions, for the Atari 7800 (renamed to "Ms. Pac-Attack") and NES.

Clicking the game title will lead you to a playable online version of it from archive.org (mobile compatibility may vary).

Pac-Man machine converted to Pac-Man Plus. 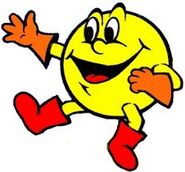 Artwork from an unknown Pac-Man Plus variant.