Pac-Man VR is a virtual reality arcade game released in 1996 by Virtuality.

Pac-Man VR is very similar to the arcade original, but played at a first-person perspective, and with a unique control scheme. There is also a reported multiplayer mode, the details of which are unknown.

The game was sold on a CD-ROM, which was inserted into the disk drive of a Virtuality arcade machine. Both SU-2000 and SU-3000 model versions were released (which are two different models of machine).

Virtuality machines as a whole performed very poorly in arcades, and Pac-Man VR was no exception. To make matters worse, nearly every machine was sent back to Virtuality, where they were eventually liquidated. As such, not a single Pac-Man VR machine has surfaced - only a short gameplay video and some old promotional material.

A company known as Virtuosity Systems claimed to have acquired the rights to Pac-Man VR in 2017. They announced plans to rerelease the title, along with other Virtuality games, for modern day VR headsets. Information was scarce, with no further announcements following for about three years. However, Pac-Man VR was officially made available for purchase again in August 2020, being sold through the Virtuosity Systems website.[1] It is believed that this is leftover old stock, as it is only compatible with the original Virtuality arcade machines. A version for modern VR platforms is reportedly still planned. 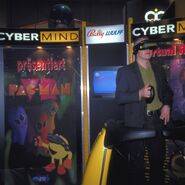 Pac-Man VR being demonstrated at an unknown German event.