1 player (2 players in some bonus modes)

Pac-Man World 2 (パックマンワールド2 Pakkuman Wārudo Tsū) is a game released by Namco Hometek in 2002 for the PlayStation 2, GameCube, Xbox, and later ported to Windows PC and Game Boy Advance. It serves as the direct sequel to Pac-Man World, and is the second game in the Pac-Man World series.

One night in Pac-Village, while all the Pac-People are asleep, Blinky, Pinky, Inky, and Clyde appear and decide to mess around. Mischievously they pick the Golden Fruit off the village's Golden Fruit Tree and play with them. Suddenly the ground shakes, and tree shoots out of the ground. Pinky and the others look in shock; the imprisoned Spooky the ghost has been released from underneath the tree. He then convinces the four ghosts to steal the Golden Fruit and join him to destroy the Pac-People.

When Pac-Man wakes up the following morning, Professor Pac-Man tells him what happened and recaps the history of Spooky; a long time ago, the great Wizard Pac used a potion to create the Golden Fruit. Sir Pac-A-Lot hen defeated Spooky and used the Golden Fruit to imprison him under the tree. With all the Golden Fruit removed, it is up to Pac-Man to get them back and defeat Spooky once more.

After Pac-Man defeats Spooky, he is re-imprisoned under the tree using the Golden Fruit. As daylight breaks, the Pac-People emerge from their homes to congratulate Pac-Man. While Blinky and the other ghosts plot to free Spooky once again, Chomp-Chomp overhears them and eats a Power Pellet, turning them blue before chasing them away.

Like in the original Pac-Man World, the player controls Pac-Man in a 3D environment, guiding him along a linear path with the simple objective of reaching the end. He must also evade enemies like Ghosts and Bears. The game has 25 levels in six different-themed environments, alongside 16 unlockable Galaxian mazes.

All basic features of the first game - Butt Bouncing, Rev Rolling, Power Pellets and the like - are implemented into this game, but are now perfected in their mechanics. The Steel Ball power-up also returns, joined by the new Shrink Pellet, which makes Pac-Man tiny for about six seconds. Pac-Man also has a new move, called a Flip Kick, that allows him to kick in midair.

Mazes are unlocked by collecting Galaxian Flagships, which appear in the majority of levels; you only have to collect the Galaxian itself (unlike in the first game, where the player must also open a door with it). Eating the item will transport Pac-Man into a three-dimensional maze, akin to the classic arcade games. The mazes can be replayed in Sue's Arcade.

In Pac-Village, there is an arcade led by a Pac-Person named Sue. This houses six arcade machines, which can be played once the player has collected the amount of required Tokens. Tokens are scattered throughout levels, with each one containing 8 tokens (and an extra 9th token for getting 100% completion). The games include:

A later version of Pac-Man World 2 was released for the Game Boy Advance in late 2005. It is a 2D platformer rather than a 3D one, due to the rather limited GBA hardware.

The game has a 3D playing field similar to 'beat-em-up' titles like Golden Axe, with Pac-Man being able to walk in all four directions, but the game is still primarily 2D in terms of artwork. Levels are rather lengthy compared to other GBA titles, taking about twenty minutes each to complete. Instead of a save feature, the game used a password system, a rarity in games released since the 90s.

Aside from its many gameplay differences, the game also features many glitches, errors, and inconsistencies. No extra arcade games appear within this release, despite being credited on the copyright screen. Three Galaxian mazes appear, but there are four Galaxians to collect total - the final one does nothing, though a text box appears stating a new maze was unlocked. In level 3, a red ghost is frozen, despite nearby ghosts behaving normally. Players also report difficulty with determining the distance of objects.

The PlayStation 2 version was the first to be released, which was shortly followed by nearly identical ports for GameCube and Xbox. The Player's Choice GameCube version was bundled with Pac-Man Vs.. As previously mentioned, the Game Boy Advance version is completely different than the other ports.

Later reprints of the game seemed to tone down the difficulty somewhat. Generally, versions under labels like "Greatest Hits" (PlayStation 2) and "Player's Choice" (GameCube) contain the "easy" version, while copies without these labels are more difficult. The European PlayStation 2 version (which was released much later, in 2003) is also the "easy" version; and it is also the case for the PC release. The Japanese PS2-only release was made even easier, making very heavy alterations (such as removing the majority of bottomless pits). 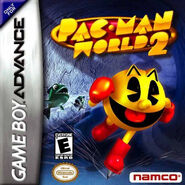 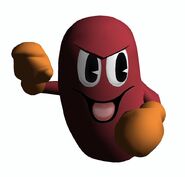 Blinky (referred to as Clyde in the game) 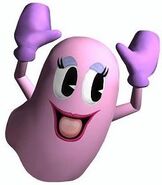 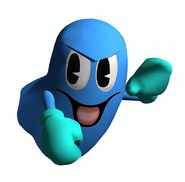 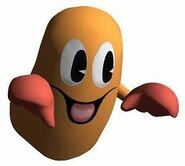 Clyde (referred to as Blinky in the game) 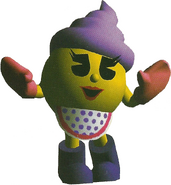 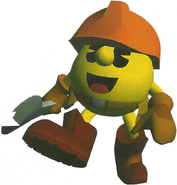 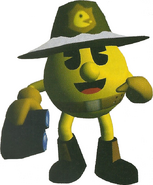 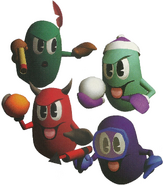