In the mid-2000s, upon the rise of mobile cell phones, Namco began work on several Pac-Man mobile games. The original became one of the most popular mobile games at the time[1], and in addition to ports of other Pac-Man and Namco titles, many Pac-Man spinoffs were released exclusively for mobile devices. Many have fallen into obscurity, and most are lost and currently unplayable in any form.

These games are ports of already existing Pac-Man games.

(Note: any game with an asterisk [*] has been removed from the App Store/Google Play store.)

Additionally, the original Pac-Man and Pac-Land were released as part of the now delisted Namco Arcade app.

(Note: any game with an asterisk [*] has been removed from the App Store/Google Play store.) 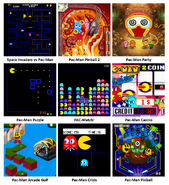 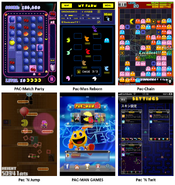