For more information on this character, see [[Pookapedia - Pooka]].

Pookas (プーカ Pūka) are an antagonistic species from the Dig Dug series of games. They are recurring characters in the Pac-Man series, where they are portrayed as being good instead of evil. They are good friends with Fygars, and mortal enemies of Dig Dug.

In the opening cutscene, Pooka is seen hopping down a trail with Baby Pac-Man bouncing on his head, on his way to Pac-Man's party. While he is hopping along, an anchor drops down on him, knocking him out. The Ghosts then kidnap Baby Pac-Man and Pooka, and deliver them to Toc-Man, where they are put into cages. The duo is later rescued by Pac-Man.

When all the worlds are played in the intended order, Pooka is the first friend to be freed. He is found in the Pirate area, at the end of the penultimate level, Crazy Cannonade; the key needed to unlock his cage is found towards the end of Corsair's Cove.

In the initial design plan for Pac-Man World, Pac-Man was planned to rescue a multitude of Namco arcade characters. The others were replaced with members of Pac-Man's family; being that Pooka originated from Dig Dug, he may have been a carry-over from this original plan.


In Pac-Man World 2, Pookas appear as enemies. They appear solely in Into the Volcano, and cannot be defeated without Pac-Man getting hurt, as they will swell up and explode. When eaten by Pooka Plants (and spat back out), they become slightly darker colored and aggressive.


Pooka is an unlockable character in Pac-Man World Rally. He is unlocked by beating the Rally Cup on Normal difficulty; in the PSP version, he is available by default. His kart is heavy and has great top speed, but has poor acceleration and handling. He can be seen pulling stunts with his goggles, like spinning them around his head and jumping rope using them.


Pooka appears in the "Pooka Pop" minigame in Pac-Man Party. The players must take turns pumping air into him; whoever accidentally pops him loses all their points. The original Dig Dug arcade game is also included in Pac-Man Party, alongside Pac-Man and Galaga.


Pooka appears as an enemy in the Smash Run game mode of Super Smash Bros for Nintendo 3DS. He is also part of Pac-Man's "Namco Roulette" taunt.


Pooka, Fygar, and Dig Dug are unlockable characters. They appear alongside Pac-Man and the Ghost Gang.


Pooka, along with Fygar and Dig Dug, make a cameo in Wreck-It Ralph at Game Central Station.

Pookas are circular red creatures wearing yellow goggles. They have stubby yellow feet and a white tail-like appendage on their back. In Pac-Man World Rally, they are shown with black legs and orange feet without the back protrusion.

Pookas are territorial, and will form positive/negative attachments to those who invade their territory. As such, they are peaceful towards the Pac-Man family, due to them being friendly with the Pookas, but are against Dig Dug, as he dug through their burrows.

While they are very cowardly, they are not afraid to fight when surrounded by other Pookas, and will attack their opponent. If they are the last Pooka standing however, they will run away in fear (or even jump into the ocean, as seen in Dig Dug II). 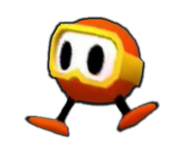