Professor Pac-Man (教授パックマン Kyōju Pakkuman), also known as Professor Pac, is a character in the Pac-Man series. He is an elderly professor of great knowledge.


In his first appearance, Professor Pac-Man runs a schoolhouse, quizzing his student (the player) on puzzling questions.


A holographic Professor Pac appears as a tutorial guide for Ms. Pac-Man on how to solve certain puzzles. He is also in the opening cinematic, in which he gives Ms. Pac the Pactrometer.


In Pac-Man World, Professor Pac is captured by Toc-Man, and must be rescued by Pac-Man.


Professor Pac appears in the intro, informing Pac-Man about Spooky's antics the previous night. He sends Pac-Man off to defeat Spooky and reclaim the Golden Fruit.

In Pac-Man: Adventures in Time, Professor Pac plays a similar role to Orson in Pac-Man World 3, talking with Pac-Man during the levels and teaching him the mechanics, however, he does not talk as much as Orson. In the introduction, he calls Pac-Man on a television and warns him about Mollusc and his plan. He is also a playable character in the multiplayer modes.

In Pac-Man Pinball Advance, Professor Pac creates the Pac-Finder, an machine capable of finding the lost residents of Pac-Land, that were kidnaped by the Ghost Gang.

In Pac-Man Pop!, Professor Pac-Man guides the player through the tutorial levels. He did not appear in the initial release - he was added in a later app revision.

Professor Pac-Man appears as an older gentleman with a white mustache. He wears glasses, and is always seen wearing a professor hat. He is often carrying a book around as well. Originally he did not have the mustache; it was added in Pac-Man World. 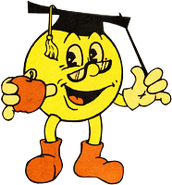 Pac-Man World 2
Add a photo to this gallery
[v · e · ?]
Retrieved from "https://pacman.fandom.com/wiki/Professor_Pac-Man?oldid=28377"
Community content is available under CC-BY-SA unless otherwise noted.