In the Pac-Man TV series, Sour Puss constantly plotted to get rid of or humiliate Chomp-Chomp, another pet of the Pac-Man family. His plans were always thwarted, usually ending up in him hurting himself.


Sour Puss appears in the American version of Pac-Land outside Pac-Man's house, waiting for his arrival. He does not appear in the original Japanese release.


Sour Puss appears in the opening of Pac-Man World; he is seen in the kitchen of Pac-Man's home with Ms. Pac-Man. It is unknown what happened to him after Ms. Pac-Man was captured, but he appears in the ending picture alongside the other rescued family members. In the original storyboard, he was going to hiss at the incoming intruder, but he was silent in the final game.[1]

Sour Puss is an orange cat with a round body. He has black strokes of fur on his back and tail. His eyes are slanted, and he has rather angry-looking eyebrows. In Pac-Man World, he is proportioned more like a real-world kitten, and had wide-open eyes; he was also a more yellow-ish color. 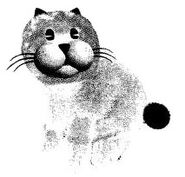 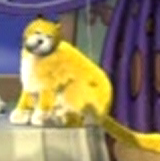 Pac-Man World
Add a photo to this gallery