Spooky (スプーキー Supuukii) is the main antagonist and the final boss of Pac-Man World 2.

In Pac-Man World 2, his main goal was to get his tree, Wormwood, to hold all five Golden Fruit. He was originally captured and held under the Golden Fruit tree by the brave Sir Pac-A-Lot, but one night, the Ghost Gang were fooling around in Pac-Village and picked the Golden Fruit from the tree. Spooky escaped from his imprisonment and ordered the ghosts to destroy Pac-Man and all the residents of Pac-Land.

Spooky is a large, looming ghost of massive size who emits a dark aura of intimidation. He wears a horned helmet, shoulder guards, and red gloves. Spooky has three clawed fingers, and crimson eyes. In Pac-Man World 2, he is a purple ghost; in Pac-Man World Rally, he is dark gray.

Unlike the common ghosts of Ghost Island, Spooky represents what evil actually is. He is angry, intimidating, and deadly powerful. He is fear-loving and enjoys the suffering of others. He seeks danger on a very high scale.

Spooky is a very powerful being capable of using all sorts of magic. Although much of his power comes from his staff, it appears he can also use magic without it. For example he can look at the ground and cause it to crack. He is able to shoot fireballs, summon various creatures, and cause a meteor shower.

Spooky's other powers include his being able daze Pac-Man for a short amount of time, and creating a powerful tornado made of energy and fire.

Spooky's goal was to terrorize Pac-Land and destroy the existence of the Pac-People. However, he hardly had any help in struggling to take over Pac-Land.

To stop Spooky's reign of terror, a noble knight named Sir Pac-A-Lot reached Spooky and dueled against him for a long while. Spooky eventually lost the fight and was sealed away under the biggest tree in the middle of Pac-Village. He was locked under it by five golden fruit (resembling the ones that Pac-Man eats during the game) which would keep him sealed for eternity so long as the Golden Fruits remained.

Spooky appeared outside of the tree when the four ghosts, Blinky, Pinky, Inky, and Clyde removed the golden fruit in an attempt to vandalize Pac-Village. Spooky emerges from the tree and explains his plan to the ghosts on how they will steal the fruit and destroy the Pac-People and rule Pac-Land. Spooky and the Ghosts then prepare leave to prepare Spooky's plan. Pac-Man and his family were asleep during the whole commotion but by morning after discovering the fruits were missing, Pac-Man went in search for them and battled his way through Spooky's forces.

After a long adventure, Pac-Man finally advances to Spooky. Spooky tells him that he won't give up his plan, thus the battle is on.

At the beginning, it shows Pac-Man putting the golden fruit back on the tree. His reward is a gold-ball powerup that never wears off. Spooky comes out from behind the tree and cuts the boundary of the village circle. This causes the piece of ground to fly up in the air while being surrounded by a deadly tornado. Prickly bushes sprout everywhere. The stormy tornado surrounding the battlefield is filled with flying debris and is deadly to the touch. Pac-Man will instantly die if he makes contact with it. During the battle, Spooky can summon enemies to attack Pac-Man and can also shoot fireballs and cause a meteor shower of meteors made of energy and fire. Plus, he can daze Pac-Man for a short amount of time with a spell.

Spooky will fly around the terrain shooting meteors at Pac-Man with his scepter/staff. He will also use his scepter to summon enemies to appear on the battlefield to help defeat Pac-Man. The enemies vary in the different phases in the battle. It starts with Neander Pac-Men, Pac-Asites, and Spiders in the first phase. It then switches to Spiders, Pac-Asites, and Skeletons in the second phase. And finally just Skeletons and Rev Roll Rams in the last phase.Eventually Spooky will levitate low enough for Pac-Man to Flip Kick him. This process repeats two more times and then Spooky will shoot fireballs and the fire will follow Pac-Man. Keep Flip Kicking him when he in reach. At the end of the battle, if Pac-Man lets Spooky levitate in the air for a certain amount of time, Pac-Man will become dizzy for a few moments. A few more Flip Kicks will defeat Spooky.

After a long battle, Pac-Man strikes at Spooky, until he finally falls, and just like Pac-Man's ancestor did thousands of years ago, Pac-Man sent Spooky back to his prison under the Golden Tree. Thus defeating Spooky and bringing peace in Pac-Land for many more years to come. 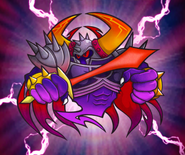