None
Vulnerable Ghosts (イジケモンスター Izikemonsuta), also referred to as Blue Ghosts, Scaredys or TURN-TO-BLUE, is the form that Ghosts take when a Pac-Person eats a Power Pellet.

While the ghost is blue, the Pac-Man is able to eat him, in which his eyes will pop out; he will regenerate after entering the Ghost Home in the center of the Maze.

The blue effect will wear off rather quickly, and will start to flash white when it is about to. In the original arcade Pac-Man and Ms. Pac-Man, the ghost will flash between white and blue states exactly nine times; this is shortened to four times on later levels, and eventually the effect wears off entirely. This is different in some home console ports (like the NES version of Pac-Man, where it flashes sixteen times).

Eating ghosts will award the player points. These are the scores earned by eating ghosts in succession:

In some later Pac-Man titles where more ghosts can appear at once, these scores can also be earned:

The rather random-seeming score of 7650 is actually a Japanese "Goroawase" wordplay on Namco (7=na, 6=mu, 5=ko, forming "Namuko"). 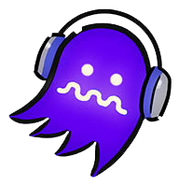 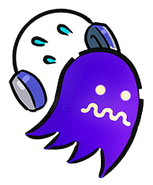 Merchandising, 2010s
Add a photo to this gallery
Retrieved from "https://pacman.fandom.com/wiki/Vulnerable_Ghost?oldid=29882"
Community content is available under CC-BY-SA unless otherwise noted.